The TrackYourDose app project is for sale:

If you are interested, please contact us via e-mail.
TrackYourDose is an iPhone app designed for frequent fliers, pilots, flight attendants and those who are radiation-conscious. It comes with a user-friendly interface and many features. The app is currently available for free in the App Store.
Available on the App Store

Received too much radiation?

Do you want to know your actual exposure to radiation? What is the radiation at your location? How much additional cosmic, ionizing and ambient radiation do you receive when you are getting x-rayed or on a certain flight?

TrackYourDose returns accurate values – calculated with scientifically sound data from the Physikalisch-Technische Bundesanstalt in Germany and the University Oulu, Finland.

With TrackYourDose you can keep a record of your personal radiation, and are able to gain an understanding of how medical examinations, changes in your location, and flights affect your personal effective radiation dose.

TrackYourDose calculates the dose at flight altitudes with functions that have been published by the Physikalisch-Technische Bundesanstalt (PTB, national metrology institute) in Germany [1] and thus is based on measurements which can be traced back to primary standards of the PTB. The calculations are valid under normal conditions of the sun, this means that only the yearly change of the suns activity is considered. Therefore, TrackYourDose complies with currently authorised computer programs to calculate the exposure to radiation of flight personel in Germany. A comparison of all authorised programs with all exisiting programs has been conducted by EURADOS and is published in the EURADOS Report 2012-03 [2].

TrackYourDose utilizes the measurements of the neutron monitor of the University Oulu in Finland, which are given as countrate in "counts per minute". On 01/01/2015 the average countrate was 5848 counts/min. On days with high countrate this value can change up to approximately 40%. For instance, the countrate on the 15/09/2007 was 6693 counts/min.

The following graphs compare the calculated radiation dose of TrackYourDose with all published results from the EURADOS Report 2012-03 [2] for low solar activity ("solar minimum") and high solar activity ("solar maximum"). The calculated radiation exposure of TrackYourDose for the flight routes given in the report agree well with the range of variation of the report. 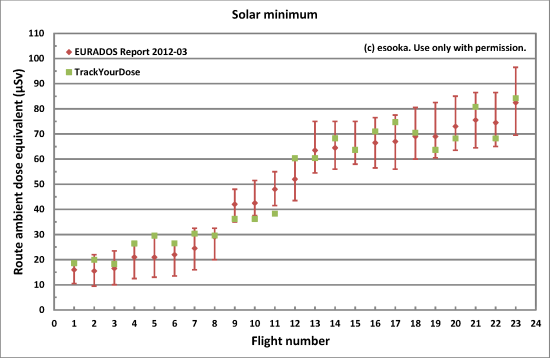 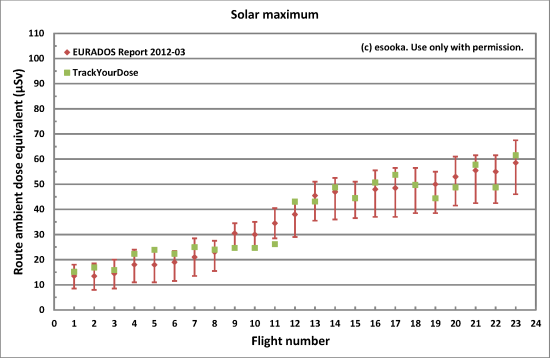 The terrestrial radiation data for Germany is measured in a dense measurement network from the Bundesamt für Strahlenschutz (Federal Office for Radiation Protection in Germany) with about 1800 measurement locations. TrackYourDose currently uses the published yearly averaged values from 2014 (TrackYourDose 1.2). The yearly dose from terrestrial radiation in Germany for all measurement locations is between 0.08 mSv/a and 1.22 mSv/a. The average dose for Germany is 0.48 mSv/a.

An daily updated map is available at http://odlinfo.bfs.de/. Please note that the data shown in the map is given in µSv/h (0.001 mSv/h) and consist of cosmic and terrestrial radiation.

The terrestrial radiation data for the USA are based on published data from the U.S. Geological Survey in the USGS Open-File Report 2005-1413 (Terrestrial Radioactivity and Gamma-ray Exposure in the United States and Canada). In this survey, the terrestrial radiation exposure was determined from airborne gamma-ray measurements. The USGS Report is available at http://pubs.usgs.gov/of/2005/1413/.

TrackYourDose has implemented average values for various countries for the radiation exposure from ingestion and inhalation, because only statistical average values are available. These values can vary due to personal lifestyle and environment.

Computer tomography (CT) and the classical X-ray examinations cause an exposure to radiation due to the ionizing X-ray radiation. The exposure level depends on the examined body part as well as the time and intensity of the radiation exposure. TrackYourDose uses published average values to determine the dose values [3-5]. Equipment type and manufacturer as well as individual and medical factors can cause a variation of the actually received dose.

Please note: The information in this application are for education purposes only and do not substitute for personal consultation, medical examination, or diagnosis through a physician.

Additionally to the well-known side effects such as vascular constriction and chronic bronchitis smoking causes a radiation exposure of the lungs. The radiation exposure per cigarette depends on the smoking behaviour and composition of the tobacco.

The radiation exposure per cigarette is included as constant value in TrackYourDose. According to this value, smoking of 20 cigarettes daily causes a yearly radiation dose of 0.3 mSv/a. This value was estimated as average value from various publication [6-12].

The following graphic shows the average radiation exposure of an average person. The natural sources cause approximately 2.4 mSv/a of the yearly radiation dose. Additionally, medical examinations cause 0.6 mSv/a. This value may vary strongly between different countries. 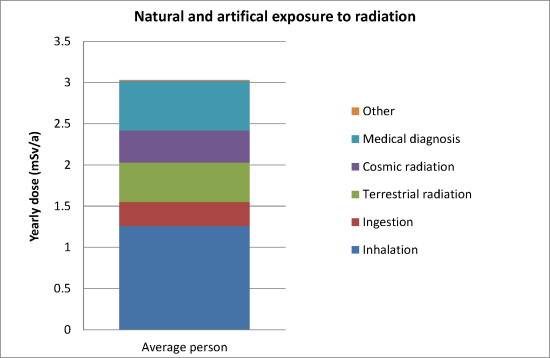 What types of radiation am I exposed to?